Today we take a quick look at one of our oldest Jatropha interspecific hybrids. It’s less than 7 months old and about 1.5 m high. Over the last 3 months it has been flowering almost constantly. Fruit development is becoming more and more robust, so we expect larger quantities of healthy seeds in the near future.

As this type of hybrid represents an intermediate stage in one of our originally charted out breeding paths male and female flowers will be used for further breeding. However, in order to exploit the full genetic variability of such a unique hybrid a next generation direct offspring (F2) will be of great interest.

Only 3 days ago it was transplanted to a large decorative pot and placed at a prominent spot in front of the house because this will be the most memorable plant of the BPL Jatropha breeding program for a long time to come. 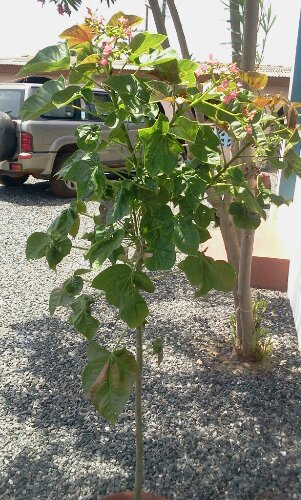 After intense rainfall once again we see a large number of fruits developing. While we already harvested an early seed we had no germination success yet. Difficulties in fruit development actually seem to be a trait inherited from the pollen donating parent. However, we are more than confident to break that barrier in the near future as we have broken the barrier before on the male parent after some experimenting.