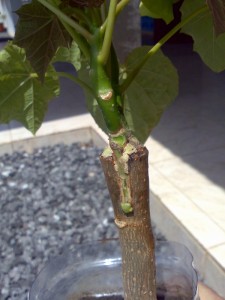 There is not a lot of information out there in the public domain about Jatropha grafting. But as with many plantation grown tree species grafting can potentially play a major role in bringing JcL planting material up to commercial speed. There are several scenarios that could make grafting interesting:

Within our JcL 3.0 platform development we are looking into beneficial ways of bringing grafting to Jatropha. We are experimenting with various grafting methods as well as different possible type of root stock and study the long term behavior of grafted plants.

Just recently we did an interesting experiment using a Cassava (Manihot esculenta) plant as root stock and a fresh branch of our best local Jatropha as scion. Very surprisingly, after only 2 weeks we had a positive result:

A simple, but very effective veneer graft did the job. In another 4-6 weeks the connection will be complete and the ends can be cut off.

Further experiments need to be conducted for this combination, but it opens an extremely interesting route for JcL improvement work. Cassava has very unique survival properties and is the only crop plant in many semi arid tropical regions that develops well through the dry season. It is planted as cuttings and develops very strong tuber roots within 6-9 months which are the reason for growing this staple food in the first place.

A major reason that motivated us to look into JcL breeding goes back to a devastating pest attack. Starting about 2 years ago the Papaya Mealy Bug arrived. It settled down heavily on all our JcL hedges and also infected tomato and pepper plantings. During the very dry year 2010 we lost almost all our crops to this bug.

Studying the little options available to fight the plague (of course the industry is willing to sell you tons of different pesticide products, but they don’t really work) of course breeding for resistance was an interesting way forward. As we had started looking at breeding for yield and removal of negative toxic effects anyway, it soon became clear what the three primary objectives for our breeding program would be: (1) yield (2) absence of toxicity and (3) resistance.

Breeding for resistance is an extremely controversial subject and past attempts have done a lot of damage to specific crops and ecosystems that play a major role in today’s overzealous use of chemicals in agriculture.

Recently I stumbled over the very enlightening books of Raoul A. Robinson, especially the one called “Return to Resistance”. (All of Mr. Robinson’s books can be downloaded for free from the internet, just google his name) In this book he lays out the problems around vertical (one gene) resistance and makes the case for horizontal resistance, with the latter being a potential remedy for many of the current food shortages.

Horizontal resistance is a multi-gen trait of a plant that is permanent similar to the kind of resistance wild plants obviously have. In commercial corps in can be achieved through continuous cycles of mass selection from self crossing accessions which will inevitably improve resistance more and more until an upper limit is reached. The larger the range of genetic variability in the breeding population, the better.

We have decided, that we will give this approach a similar chance as the “Mendelian” approach where we cross breed intra- and interspecific hybrids looking for the best combination of traits (pedigree breeding). We actually believe, that introducing interspecific hybrids with their greater genetic variance can help improve the start-up population for the mass selection population.

Anyone with some interest in the subject should definitely have a look at Raoul Robinson’s books. You don’t have to be an agronomist or a plant breeder to understand his work. I can only highly recommend it.